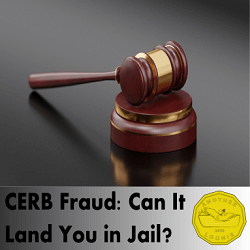 What Is the CERB

The Canada Emergency Response Benefit (CERB) is a $2,000 monthly taxable benefit. The Canadian government launched CERB on April 7, 2020 to help those facing unemployment due to the COVID-19 pandemic. The uptake on this program has been enormous, with 3.5 million Canadians applying within the first week alone. Eligibility was expanded to include seasonal workers, workers who’s Employment Insurance had run out, and individuals making less than $1,000 per month due to reduced hours.

To be eligible for the monthly $2,000 CERB payment one must meet all four of the qualifying criteria:

Originally the CERB covered 16 weeks starting from March 15. On June 16 the Canadian government extended the program by an additional 8 weeks.

Falsifying information to apply for the CERB when not actually qualified is fraud. For example, let’s say you work at a grocery store part time. Imagine you’re annoyed that you could be earning more if you just got fired and collected the CERB. If you voluntarily quit your job and applied for the program, under the guise of having been laid off due to COVID, you would be committing CERB fraud. Another example of CERB fraud includes applying while earning more than $1,000 in employment or self-employment income.

The CRA have outlined a few different levels of penalties that they regularly impose on individuals. The first set of penalties are civil penalties. The most common civil penalty is the late-filing penalty. This applies when an individual is late filing their return from the previous year. Not being the most serious offense, the penalty is simply 5% of your tax balance owed plus 1%.

As the offense gets more serious, so does the penalty. For making false statements or omissions, an individual can be penalized the greater of $100 or 50% of the understated or overstated tax credits received. This seems applicable to our CERB fraud examples described above, where someone applies for the benefit despite not being qualified. If this penalty were applied, the fraudster would have to repay the total amount received in CERB payments plus an additional 50% of the payments they received. That means if you received the CERB over the 24 week eligibility period, you could have to repay the $12,000 you received plus an additional $6,000.

The courts impose the most serious punishments one can receive for tax reasons. These include judgments for criminal tax evasion, which can earn you a sentence of up to five years in prison, and criminal fraud, which can earn you up to 14 years. These judgments also regularly include having to repay the tax owed and other penalties imposed by the court.

On June 2 the CRA started encouraging Canadians to use their tip line to report individuals committing CERB fraud. Since then, the CRA website was updated to recommend reporting “individuals receiving the Canada Emergency Response Benefit who do not meet the eligibility criteria” (source). On its first day of operation the tip line received over 600 tips of alleged CERB fraud.

It’s quite ordinary for the CRA to encourage Canadians to report others who may be circumventing tax law. A recent example includes the CRA’s “Offshore Tax Informant Program”. This program awards tippers a portion of the unpaid taxes the CRA uncovers. Programs like this show that the CRA is serious about tackling fraud and tax evasion. It wouldn’t be surprising if the CRA announced a similar program to help catch Canadians committing CERB fraud.

On June 8, Prime Minister Justin Trudeau took further steps to tackle CERB fraud. The Liberal’s proposed legislation introduced a fine of up to $5,000. It also included a fine of up to double the amount of fraudulent CERB payments received. Alternatively, individuals could receive 6 months in jail along with a $5,000 fine. It also sought to write into law that workers would be ineligible for the CERB if they:

Canadians breaching these conditions could receive penalties of up to three times the amount CERB payments they applied for.

As of June 22 the proposed legislation was dead-on-arrival, with no support from opposition parties to move it onto second reading. Despite this, the Liberals actions do give us some hints of what’s to come. There is certainly an appetite for cracking down harder on CERB fraud.

Can You Go to Jail for CERB Fraud?

Unless new legislation is passed, you probably won’t go to jail for CERB fraud if you’ve applied for it while ineligible. That’s not to say that some people won’t be charged for CERB fraud. There have already been a few charges laid, but each of these cases have some aggravating factors. Factors like opening multiple bank accounts to apply for extra CERB payments, trying to apply for the CERB in another person’s name, or scamming someone to receive their CERB payment. So unless you’re participating in one of those egregious cases of fraud, the CRA will just want their money back – likely with penalties.

The fact is, tax cheats in Canada only rarely go to jail. The CRA’s own statistics show that for any given year only around 100 Canadians are charged for criminal tax evasion or fraud. And of these approximately 100 individuals, only around 25% receive a judgment that includes a prison sentence. Comparing these numbers to the U.S. highlights just how lenient Canada is when it comes to tax cheats. In 2013, the U.S. Internal Revenue Service reported 3,311 tax-related criminal convictions with over 80% of cases leading to jail time for those convicted.

With so few cases of tax evasion and fraud being forwarded to criminal prosecutors, what does it take for someone to be sent to jail for tax reasons? Well, the answer is a lot. The CRA maintains a list of recent compliance actions and it shows that to end up in prison your fraud has to be especially egregious. Usually the case involves committing fraud using a business, helping others commit fraud as a tax preparer, or participating in a “tax protestor” scheme. Some examples include:

What to Do If You’ve Committed CERB Fraud

The CRA is lenient towards Canadians who make honest mistakes or who self-report when they’ve improperly received a benefit. Generally, the CRA just wants what they’re owed. If you’re forthright and honest in your error they usually won’t come after you for penalties or fines. There have already been over 190,000 Canadians that have erroneously or fraudulently applied for CERB and decided to pay it back. If you’ve also received CERB while ineligible, I recommend following the CRA’s own guidance explaining how to repay.

CERB fraud is serious. The goal of these payments is to help stabilize the economy and people’s livelihoods during the COVID-19 pandemic. The goal isn’t to allow Canadians to stop working unnecessarily. As of June 4, the Canadian government has already paid out over $43 billion dollars in CERB payments. The government will pay an additional $17.9 billion for the extra 8 weeks of CERB. With all of this money being spent, the CRA and Liberals are under enormous pressure to go after CERB fraud. That pressure will likely increase as the economy continues to open. If you have committed CERB fraud the best course of action is to repay the money you received. Otherwise, if you’re caught, you could be forced to return the money and pay thousands of dollars in additional penalties.

If you enjoyed this article, please consider following me on social media or signing up to my monthly newsletter! Follow me on my journey as I strive to reach financial freedom. I encourage you to check out my recent articles on how I save money on Amazon Canada and my list of the best dividend ETFs for Canadians!